Overview of responses to first round of consultation

We realise that not everyone will have the time to look through all of the experiences and ideas one by one, so we’ve prepared this summary and video to give you an overview of the main points.

We asked two basic questions in the first round of consultation - how you move around Waverley Park now (current experiences ), and how you’d like your streets and spaces to be in the future ( ideas ).

Firstly, we asked people about their experiences of moving around Waverley Park. Where do people go? What streets and spaces do they like and not like?

There were over 150 responses, which you can read on the Experiences page.

The chart shows how many times different topics were mentioned by people. 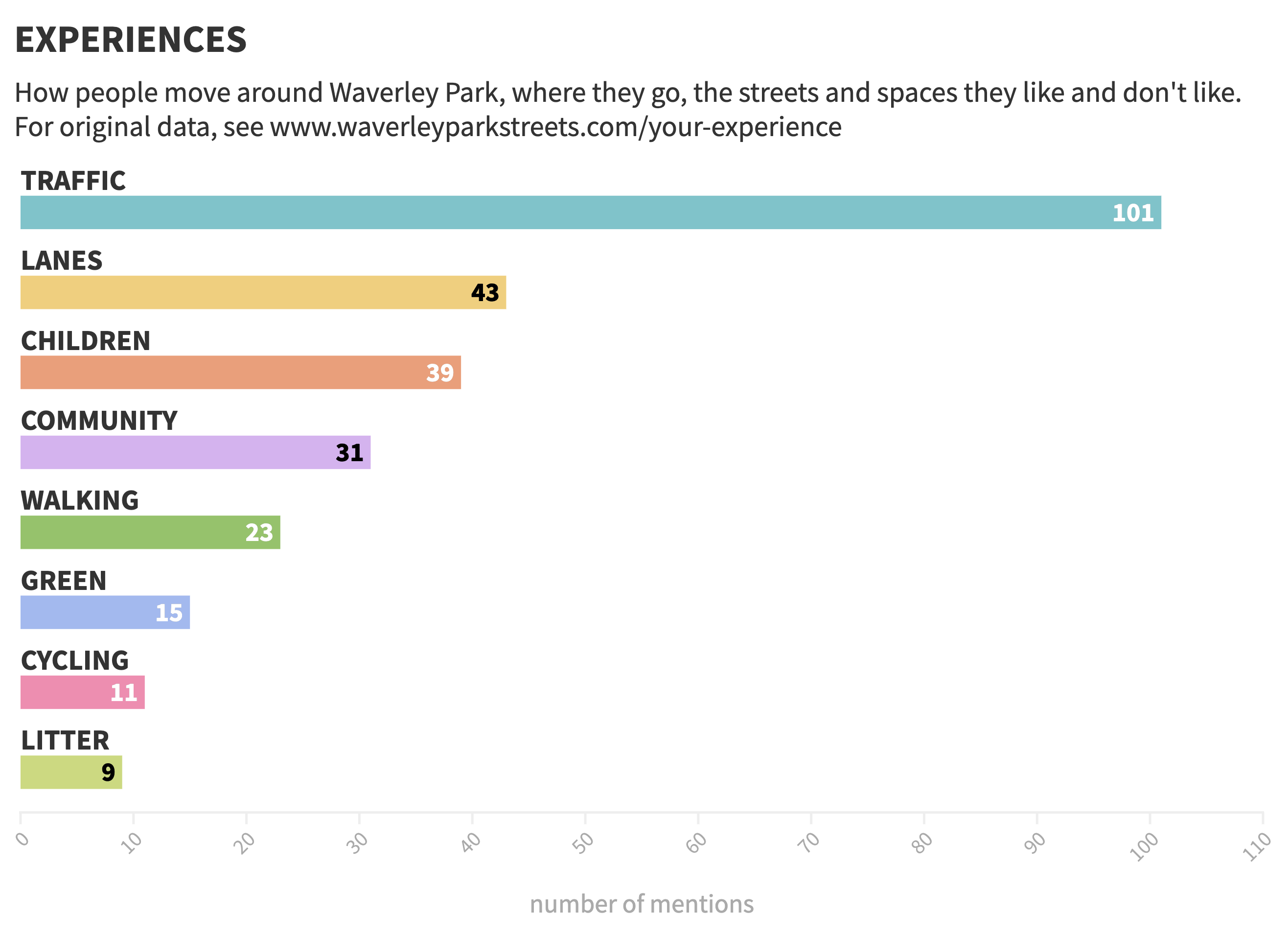 Traffic is clearly the biggest single issue, with 101 mentions. Speed and volume of traffic were the main concerns, particularly ratunning and aggressive noisy driving. Ravenswood and Dinmont are particularly badly affected. Pavement parking around the school gates and junctions is a concern.

Here’s a typical comment from those you can see on the Experiences page: “Traffic speed is terrifying on Ravenswood Drive. Aggressive, reckless drivers are the norm. This is by delivery drivers, commuters, parents, boy racers. At all times of day.”

And another: “I can't let my 8 year old visit her friends independently because I can't let her cross the road alone. The level of trucks, vans and rat-running is ridiculous in a residential area.”

43 people mentioned the lanes. They clearly are a much loved asset - green, handy walking routes and generally peaceful and safe places to play. But there are concerns about poor condition and occasional antisocial behaviour.

Another typical quote from Experiences page: “I love the lanes. They're an amazing resource for kids to play and to chat to neighbours. Could we connect then across the streets better, providing safe priority for crossing?”

Children feature in 39 responses and come across as an important part of Waverley Park - how nice it is having them around, how the lanes are a great resource for them, but also how the streets can be dangerous for them.

31 responses said what a great community you have! People love the community spirit, enjoy the ‘play days’ when streets are closed traffic and folk get together, and they like stopping for a chat.

This nine year old seems to speak for many when she says: “I like when we have the play out day! I like that everyone is really friendly. I like going past the neighbours’ houses and they say hello. I’d like to have cleaner streets. When I go up the lane it’s sometimes quite messy. I’d like to have cars going less fast. Some cars go very fast and sometimes when you’re crossing a road, you look and nothing is coming and just when you’re about to cross, a car speeds past .”

Walking and cycling are popular ways of getting to the shops, school, stations or the park. More people walk (23 mentions) than cycle (11 mentions). Crossing roads can be hazardous from traffic, poorly parked cars and blocked drains, particularly for those with pushchairs or wheelchairs. The steps by Shawlands station are a barrier. In winter, ungritted pavements are hazardous.

“Waverley Park can be a great place to live but can also feel overrun by traffic especially at peak times , as a new resident I have struggled to know where is safe for my children to play and to find places I can bump into my neighbours”

Trees, greenery, nature and birdsong were mentioned by 15 people, who remarked on how uplifting it is to have those things in the community.

Litter in lanes and dog dirt was mentioned by 9 people, less than 10% of the number of folk who referred to traffic.

A final quote from the Experiences section which sums up much of what this project is about: “It’s great to see a group of neighbours dedicating their free time to help improve our community. The fact that we border two schools means we’ve got an opportunity to do something that makes the trip on foot or by bike to school better and safer. I’d also benefit from better road safety when cycling to Maxwell Park and Queen’s Park, for myself and my kids.”

The second question we asked was: how could streets and spaces be improved? Respondents were asked to add their ideas to a map of Waverley Park.

There were over 400 responses, and you can read and see the locations that each of them refer to on the Ideas page.

The chart shows how many times different topics were mentioned by people. 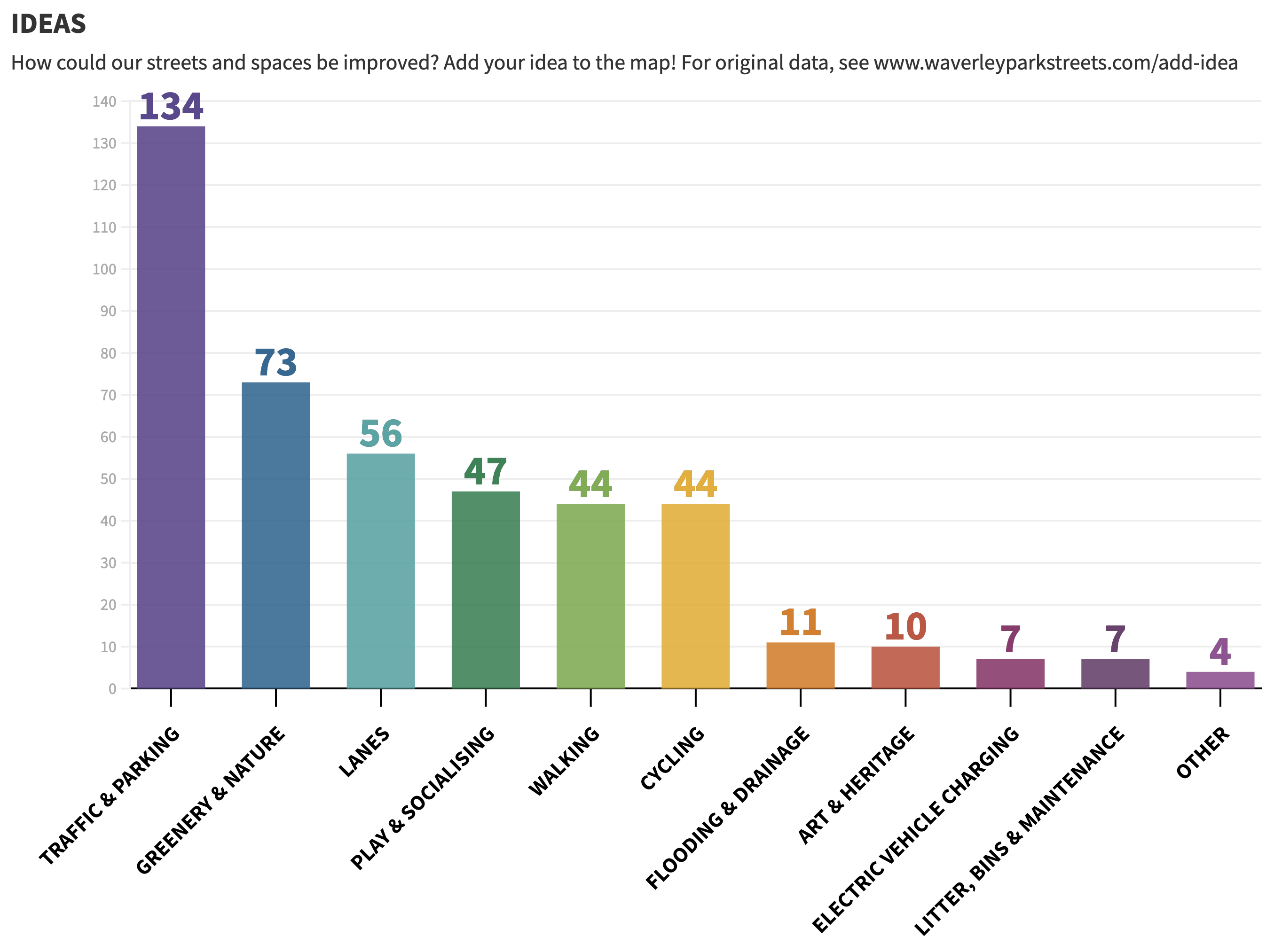 Again, traffic was by far the biggest focus - mentioned by 134 people. Most suggestions related to better management of traffic speed, volume and parking. Different views were expressed about how to manage traffic, which is why we’ve produced three options for the next stage of consultation. Many people expressed the need to consider the consequences of what is done in Waverley Park on surrounding streets and neighbourhoods.

73 people suggested ideas to encourage more nature and greenery, such as planters for trees or shrubs which could also help manage traffic, and making the lanes greener.

The lanes themselves were mentioned by 56 people - mainly to repair surfaces, make them greener and better bin management - so creating safe green spaces to walk and play. A few folk suggested this could be organised by groups of local residents, like “lanes committees”.

47 people suggested creating more opportunities for play and socialising such as benches to sit and have a chat. Many people also expressed the need to avoid causing noise and disturbance outside people's homes.

44 people suggested improvements for walking - particularly related to safety along routes to schools, shops and parks.

Coincidentally, exactly the same number (but not always the same people) suggested cycling improvements such as making it easier to wheel a bike under and over the bridges by Shawlands station, for example.

Smaller numbers of people made suggestions about:

Whilst you won’t see all of these ideas reflected in the design options we’re showing in this second round of consultation, we haven’t forgotten them. We will consider them all in the more comprehensive design proposal that will be the focus of the third round of consultation in the summer.

We hope that’s given you an impartial and informative overview of what folk said in response to the first round of consultation. You can see all of the original responses on the experiences and ideas pages.

Don’t forget to check out the three design options and tell us what you think!